$14.95 $24.95
The Show Runner
An Insider’s Guide to Successful TV Production
by Cy Chermak
Now Shipping.
(Please note: Copies signed by the author are no longer available)
Cy Chermak will charm readers with his humor as he takes us into the world of television show business’ dealing with writers, directors, actors and the networks.  His producing credits include the iconic TV series CHiPs, Ironside, The Virginian, The Bold Ones, Barbary Coast, and Kolchak:  The Night Stalker, among others.
During his 30-year career in television, Cy also worked as a freelance writer (Bonanza, Star Trek: The Next Generation, and dozens of others), a Story Editor (Rescue 8 and The Virginian), and has been nominated for three primetime Emmys, the Writers Guild of America Award, and the Humanitas Prize.  Mr. Chermak is also the proud recipient of the NAACP’s Image Award.
In this memoir, Cy reveals his real-life experiences, lessons learned, regrets, and many delights.
“His stories are wonderful, insightful, humorous, and full of vital knowledge ...
This is a highly-entertaining, information-packed, must-read ...
I wish I'd been able to read this book before I ran my first show...it would have saved me a lot of pain.“
- Lee Goldberg, #1 New York Times bestselling author
and the show runner of Diagnosis Murder, Martial Law, and Missing, among others
"Cy Chermak’s memoir is ‘honest… real… believable.’ …
nothing less than a top-notch true-to-life tale
of behind-the-scenes comings and goings… told with humor, credibility, and class.”
-  Herbie J Pilato, writer/producer/performer

Note from the Author.. 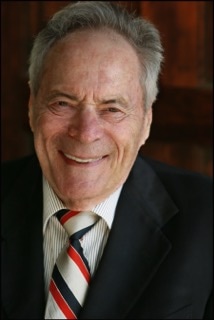 (Photo by Michael Helms)
I want to answer for you that often asked question; what does a producer really do?  I’m going to take you along with me as a hypothetical partner.
We’ll produce a show together, working at every step that goes into creating a TV series, and getting its episodes onto the air.  Along the way, I’ll share some reminiscences that are by turns funny or frightening.   Your head might spin ... your stomach might churn ... you might never watch TV quite the same way again.
But I’m sure that when the ride is over, you’ll wish you could get back in line to take it again!
You will know what it is like to be THE SHOW RUNNER.